Modeling of a Two-zone-fluidized bed reactors for butadiene production

Aim of the project is the experimental investigation and the numerical modelling of a two-zone fluidized bed reactor (TZFBR) to produce the important basic chemical 1,3-butadiene from n‑butane. This process is a promising alternative to existing processes and sets an example for the possible production of numerous other chemicals in fluidized beds (e.g. olefin and synthesis gas production).

The importance of butadiene synthesis lies in the fact that it is one of the basic petrochemical products. Styrene-butadiene rubber is by far the biggest starting material used to produce synthetic rubber. Approximately 90% of the 9 million tons of 1,3-butadiene produced yearly will be used for rubber synthesis. Due to its excellent polymerization properties, butadiene is used for many other important polymers such as polybutadiene, styrene-butadiene latex and the special plastic ABS (acrylonitrile-butadiene-styrene). Furthermore, the demand of butadiene is predicted to rise in the next years.

Currently, 1,3-butadiene is mainly produced as a by-product when steam cracking naphtha in ethylene synthesis. Currently only 10% butadiene is yielded via dehydrogenation of n-butene, n-butane or through catalytic ethanol coupling. Today’s processes based on converting n-butane are exclusively implemented in two-stage procedures. The direct dehydrogenation of n-butane to 1,3-butadiene delivers very small yields, which is why the main products of the dehydrogenation, e.g., n-butene, have to undergo another dehydrogenation to attain 1,3-butadiene. Due to financial reasons, a single-stage process to produce 1,3-butadiene from n-butane is pursued. So far, no single-stage process is known for the synthetization of 1,3-butadiene where the yield and selectivity is large enough for an economic application. Currently, two-zone fluidized bed reactors (see Figure 1) show the highest yields as well as selectivity. The reaction takes place in the reaction zone located above the n-butane inlet using the lattice oxygen of the catalyst. At the bottom of the fluidized bed, in the so-called regeneration zone, lattice oxygen is filled up. Then, particles are transported back into the reaction zone. It is exactly this particle exchange between the two zones that is thought to be of critical importance for the overall yield of the process.

The oxidative dehydrogenation (ODH) of n-butane can basically be performed with molecular oxygen. Unfortunately, a total oxidation of n-butane would preferably occur in such a case. To perform an ODH with a high selectivity towards 1,3-butadiene, catalysts that are able to activate n-butane, as well as initiate an ODH under formation of water by means of lattice oxygen are, therefore, required. Consequently, the active species must be able to exchange the oxidation level and compensate for the empty lattice site. Especially transition metals V and Mo show favourable characteristics for this. Mechanistically, the ongoing reaction chemistry can be described with the so-called Mars and Van Krevelen mechanism.

In a previous study a two-zone fluidized bed reactor (TZFBR) was designed, built and experimentally investigated. Figure 1 shows a sketch of the reactor. The reactor consists of a 40 cm long quartz tube with an inner diameter of 28 mm. At the bottom of the reactor a frit (pore size 160-250 µm) holds the particles and homogenizes the incoming gas flow. Inside the reactor, a quartz tube (0.2 mm inner diameter) with two holes at the end of the T-junction, serves as n-butane inlet. The product stream leaves the reactor at a side outlet.

The oxidative dehydrogenation of n-butane has been studied using various catalysts, among them two different Mo-V-MgO catalysts. Both catalysts have been prepared by incipient wetness impregnation and were calcinated at different temperatures, one at 640°C (catalyst 640) and one at 720°C (catalyst 720). 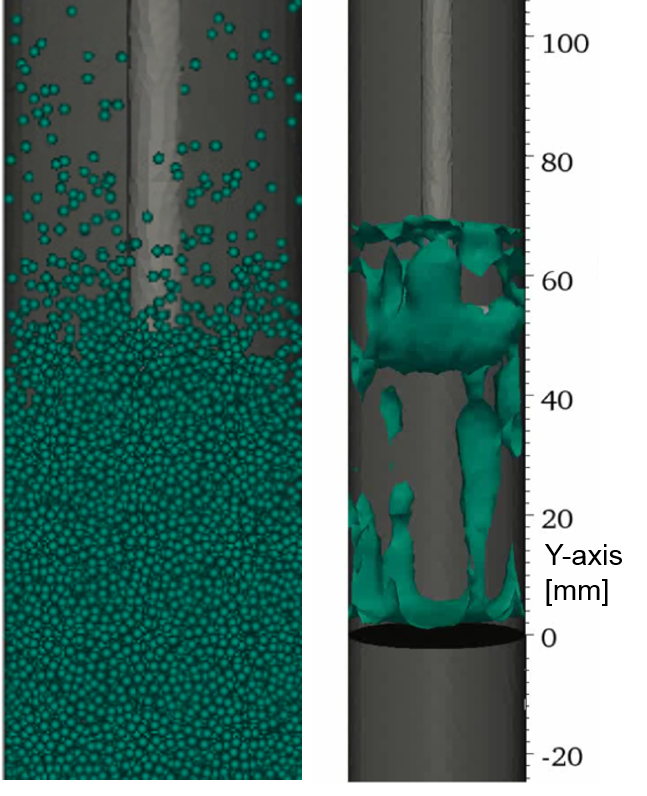 We investigate the modeling of the two-zone fluidized bed reactor (TZFBR).

We use the CFD-DEM software CFDEM®coupling which is an open source CFD-DEM tool. The CFD-DEM method is a synthesis of CFD and DEM to model coupled fluid-granular systems. The motion of the particles is resolved with DEM, and the CFD method is used to calculate the fluid flow (Eulerian-Lagrangian approach). Within the frame of CFDEM®coupling the DEM engine LIGGGHTS® is coupled to the open source CDF code OpenFOAM. We plan to use the same software for the requested funding. Comprehensive experience with the application and extension of the source code of OpenFOAM is available.

The size of the particles in the real system is in the range of 160 µm - 250 µm, leading to a particle number of ca. 6×106. To minimize the calculation times, we reduced the number of particles to 86×103 with a diameter of 800 µm. The calculations were done for isothermal conditions without reaction. The geometry shown in Fig.1 was discretized with a tetrahedral grid with ca. 80,000 cells. The velocity at the lower inlet was 0.23 m/s, and appropriate numerical parameters were chosen. Instantaneous field data was time-averaged to obtain time mean quantities. The calculation typically takes two days on a PC with eight cores.

In Fig. 3 some sections through the midplane of the reactor are shown. The time-averaged overall velocity of the gas phase U (left) indicates that the velocity is largest near the wall, which agrees with the finding that bubble formation is preferred in this region. The time-averaged overall velocity of the particle phase Us (middle) shows, that the movement of the particles is most intense in the centre of the reactor. The time-averaged distribution of an additional scalar (right), which was fed through the probe, indicates that the concentration field is relatively homogeneous in the upper zone (i.e., the reaction zone), which supports the concept of two distinct zones inside the reactor. The analysis of the time-dependent fluctuations revealed only small fluctuations of the mixture field.

Although the results were achieved for isothermal conditions (without reaction), they show the complexity of the system. The main aim of this study was to prove, that the open-source software CFDEM®coupling is suitable for the planned modelling of the TZFBR. The modeling will be extended using the additional package ParScale to take into account the surface reaction chemistry and the intra-particle transport phenomena.