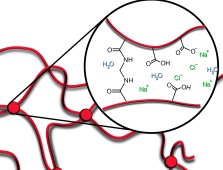 A hydrogel is a polymer network containing charges in the main chain (see picture on the left). Due to the repulsion between the charged main chains it can swell with water to enormous size, 1 g of Hydrogel can uptake up to 1000 g of water. This functionality is used in several application fields: baby diapers, packing (food), sealant, agriculture or drill fluids in oil production to name just a few.

The electrostatic interaction of polymers in solution is dependent on the the ionic strength, additional salt in the medium reduces the interaction between the the polymer chains. This effect is a general property of the Coulomb interaction, the resulting potential is known as screened coulomb potential or Debye-Hückel potential. Therefore, if you add additonal charges to the water, the electrostatic repulsion of the polymer chains will decrease resulting in a less swollen hydrogel.

Using this feature of the coulomb interaction, a polymeric hydrogel and the concentration gradient between seawater and fresh water can be used to drive a mechanical motor. This we could demonstrate with our lab experiment shown in the picture at the right. 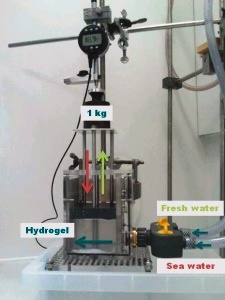 In the start, the hydrogel is swollen with salt water, therefore expands only to a small extend. If you flash the hydrogel with fresh water, it will swell to its maximum extend, this volume expansion can be used to create mechanical force, in this case to lift a weight.

In our experiment we use 10g of a commercial hydrogel consitsing of particles in the sirze of several 100 µm. As fresh water we used de-ioinzed water, as seawater a NaCl-Solution of 4.3 weight percent (Ionic strength of 0.729 mol/l). One Cycle (swell and deswell) needs 1 h of time, we were able to lift a weight of 1.5 kg (weight + apparature). 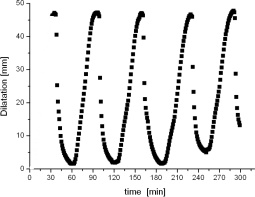 On the way to technical used machine one important property is a constant swelling capability of the gel over a high number of repetition cycles. This is shown in the diagramm below for 5 cycles.

In the video above the same 5 cycles are shown, 1 picture is taken every 15 sec, the resulting movie is played with 25 frames per second, e.g. with a time-lapse of 1:375.

Detailed Explanation of the Osmose-motor